More Than Just a Game

Since 1925, the East-West Shrine Bowl has benefited Shriners Children’s and its mission to provide excellent specialty care for children. This unique health care system provides excellent care for children with orthopedic conditions, burns, spinal cord injuries, and cleft lip and palate, regardless of the families’ ability to pay for services. This special game helps raise the profile of Shriners Children, so that we can continue to offer hope and healing and reach more kids in more places. Through the experience, everyone connected with the East-West Shrine Bowl gains a deeper understanding of the amazing patients who receive care at Shriners Children’s and the ways that they can support the health care system.

The East-West Shrine Bowl is the longest-running college all-star football game in the nation. An important part of America’s football tradition, the event gives top college players a chance to showcase their talents to NFL scouts and a national television audience. This year, the EastWest Shrine Bowl is part of the NFL’s Pro Bowl Week events in Las Vegas, Nevada.

For more than 90 years, some of football’s greatest athletes and coaches have contributed to the tradition of the East-West Shrine Bowl. Players like Gale Sayers, Tom Brady, John Elway, Allan Page, Dick Butkus, Brett Favre, Gino Marchetti and Walter Payton, along with coaches Don Shula, Dick Vermeil, Paul “Bear” Bryant and Jerry Glanville, to name a few, have supported the East-West Shrine Bowl.

Watch live on NFL Network, or experience the action in-person on game day.

Story Behind the Logo

East-West Shrine Bowl fansare familiar with the event’s logo. The image of a football player walking with a young girl appears on game posters, billboards, T-shirts, and on the event’s website. It’s an iconic image that tells the story of the special bond between college football and Shriners Children’s. 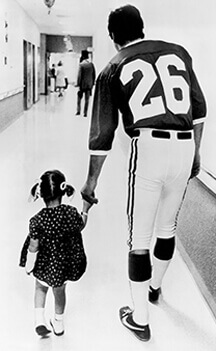 In 1974, a 2-year-old patient named Nicole was receiving care at Shriners Hospitals for Children® – San Francisco (later Shriners Children’s Northern California). She was born with Holt-Oram syndrome, a genetic condition that affects bones in the arms and hands. For Nicole, this meant that her thumbs had not fully developed. To provide more functionality, surgeons removed her thumbs and repositioned her index fingers in their place. This procedure would allow Nicole to comb her own hair, button a shirt, hold a cup and be independent.

On the same day she was recovering from her first surgery, football players from the 1974 East-West Shrine Game visited the hospital. A tradition during the week of events leading up to the big football game, the visit gives players the opportunity to interact with patients and learn more about Shriners  Children’s.

One of the players, Mike Esposito, noticed Nicole because she appeared scared and was crying. Esposito took her hand to calm her down and they walked down the hallway together. A photographer from a local newspaper noticed the scene and snapped a photo of the two new friends. The image perfectly depicts our mission, and became the inspiration for the official logo of the East-West Shrine Bowl.

The newspaper image of Nicole and Mike Espoisito taken by Ken Yimm, Peninsula Times-Tribune,
at the East-West Shrine Game players visit to Shriners  Children’s. in 1974.

In 1988, at the 63rd East-West Shrine Game in Stanford, Calif., Nicole and Mike Esposito were reunited. At halftime, in front of an emotional crowd, they walked across the field hand-in-hand. “It was definitely an exciting and nerve-wracking moment walking on the field in front of so many people,” said Nicole. “I remember Mike being extremely calm and comforting, just like he was when I first met him.”

Nicole has three children of her own and works with children with disabilities. Her son, Collin, was born with Holt-Oram syndrome and received treatment at Shriners  Children’s— Northern California. Nicole recalls mixed emotions about her son’s condition. “A part of me was obviously concerned, but another part felt secure because I knew this was the best place for him to be treated”.

“I was surprised that most of the staff was still there and remembered who I was. I think that’s what separates Shriners  Children’s from everybody else; instead of treating you as a patient, they treat you as part of their family.” 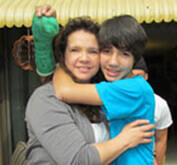 A History of Milestones and Achievements

The East-West Shrine Bowl has come a long way from its humble beginnings in San Francisco. Prior to 1925, the East-West Shrine Bowl was a baseball game held several times between the Islam Shriners (presently Asiya Shriners) and the Elks. While the game raised money for each of their respective charities, Shriners team captain E. Jack Spaulding thought there must be a way to generate more exposure for the organizations, and came up with the idea of replacing the baseball game with football. He determined that an all-star football game, featuring the best college players competing against one another, might be more successful, and the concept of the East-West Shrine Bowl was born, with all net proceeds from the game benefiting Shriners  Children’s.

On December 26, 1925, at San Francisco’s Ewing Field, the top college football players from the East and West coasts came together in an exciting match-up of extraordinary talent, and the Shriners hosted the very first college all-star football game in the nation, before an audience of 25,000 fans — the largest crowd in the ballpark’s history. The game raised $25,000, which was donated to Shriners Hospitals for Children — San Francisco. The game has continued to benefit Shriners  Children’s throughout its 90-plus year history.

Watch live on NFL Network, or experience the action in-person on game day.

Shriners  Children’s is a health care system with locations in the U.S., Canada and Mexico. Our staff is dedicated to improving the lives of children by providing pediatric specialty care, conducting innovative research, and offering outstanding teaching programs for medical professionals. Children up to age 18 with orthopaedic conditions, burns, spinal cord injuries, and cleft lip and palate are eligible for care, regardless of the families’ ability to pay.

Within these broad service lines, many types of care are provided. For example, some locations offer reconstructive plastic surgery, treatment for craniofacial abnormalities or care for sports injuries. Generally, care is provided until age 18, although, in some cases, it may be extended to age 21.

Shriners  Children’s is committed to conducting high quality, innovative research in the areas of burns, orthopaedic/musculoskeletal and neurological injury and disease in order to improve the care and quality of life of children with these conditions and challenges.

Shriners  Children’s is proud of its role in medical education. By maintaining relationships with several medical teaching facilities, Shriners  Children’s fosters an academic environment committed to providing high-quality education for its medical staff and excellent care to all patients. 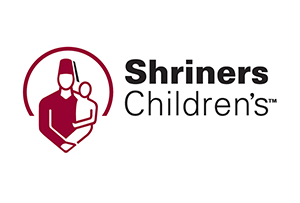